I’d been at Barclaycard for just over a year when my son was born. It was a Thursday. I was 27 and trying ever so hard to grow my network, build my reputation, and develop my career.

Earlier in the week there’d been a couple of false labour starts, so when my wife called to say it was happening (in my defence, for the third time that week) I didn’t exactly rush out of the office. Actually, I think she called me two more times whilst I was “just finishing off” a few things.

To cut a long story short, my son was born later that evening and my paternity leave started. (My first paternity leave was fine… it was only the second time around I found paternity leave difficult). Two weeks came and went, and suddenly I was back in the office looking the worse for wear. I know this because one of the developers asked how I was; I answered, “tired”, to which she replied, “Yes Dan, you look it”.

I still feel there’s a stigma attached to new fathers (particularly first-timers) relating to  their ability to perform. What I didn’t realise, though, is that I needn’t have worried. My son was inadvertently teaching me new skills that I would start using at work – and it’s these skills that helped secure the promotions.

You’ve just got to see it through. The whole “cry it out” method never sat well with me, so the only option was perseverance until the job was done. That made dealing with difficult people at work incredibly easy, as, generally speaking, colleagues aren’t screaming in your face.

Work is incredibly important to me. So is my family. That’s the whole point of Career Dad. By “What’s important” I mean the prioritisation of work. I didn’t have as much time as I was used to having, so I needed to figure out where I should focus my energy and what I needed to let go of.

Work smarter, not harder. Order your to-do list, then look at the bottom half.  How important are those things? What would happen if you simply didn’t do them, and focused your energy elsewhere? Try it – see what happens.

When my son was born, time became an abstract concept. 4:00 am on a weekday was the same as 2:00 pm on the weekend… it didn’t matter. I also had much less time on my hands, but still had to get through the same number of chores: the food shop, laundry, showering, etc. Dovetailing with prioritisation was productivity.

Where was the “dead time”, and how could I better use it? Ultimately this led to an interest and adoption of Agile delivery, which was been revolutionary!

Thinking about things a little differently

When my son was older, we were playing with a shape sorter. I tried not to get frustrated as he pushed the shapes through the elastic sides, instead of placing them through their corresponding holes. Later it hit me: just because he wasn’t going about it “the right way”, the task was still being completed. The shapes were ending up inside the shape sorter.

Thinking about the end result instead of the journey has almost become a passion. It’s led to my mantra: “Bring me your problems, not your solutions”. I may be able to bend the elastic so you can get your shapes in easier.

One of my daughter’s first words has been ‘Hel

For all my data nerds out there! Everyone loves a

So I had a go at making Sourdough Doughnuts this w

Everyone loves a trier. And a journey. And documen 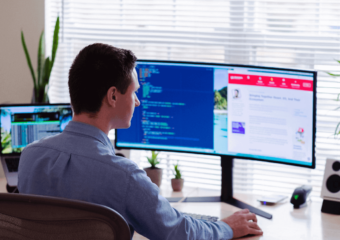 Changing careers is always a huge step. It becomes even more of one when you’re a dad.

I always thought I'd raise my daughter in exactly the same way as my son. I quickly realised that was...

As an English graduate I both love and understand the importance of books. That's why I found it so difficult...